I am very experienced in guiding in German, English and French. Will make your visit in Israel personal, instructive, and enjoyable. Some of my most popular tours:

2. Jerusalem of gold - including Mt. of Olives and Mt. Zion

5. In the footsteps of Jesus in the Galilee: Nazareth, Tabgha, Capernaum 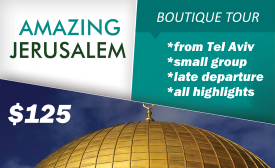