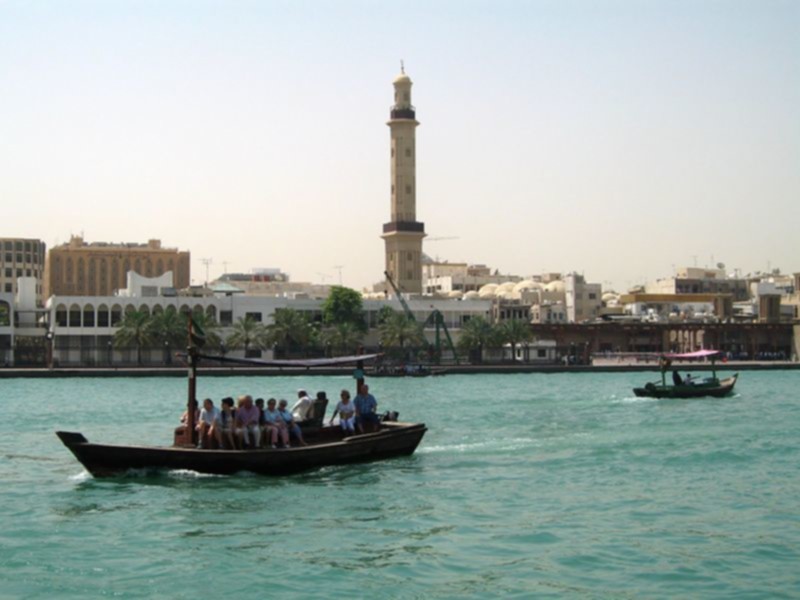 Metro
Dubai’s 74.6-km long Metro lane opened in September 2009 comprises of Green &Red lanes, is the third largest metro in the Arab world.
While the line does serve the old city center, it’s handy for zipping along Dubai’s Sheikh Zayed Road and includes stops at the airport, Burj Khalifa and the Mall of the Emirates. The Green Line, which burrows through the city core, has been opened as of September 9, 2011.
Interchanging the lanes are possible at Union Square and Burjuman .There are also Blue and Purple lines under construction with opening dates in the next few years.
Single tickets range from Dh3-8.50, or double that for use of the “Gold” first class carriage. Train run every 3-5 minutes from 5:50 AM to Midnight every day.
when services are extended to 5:50 AM to 1 AM respectively. All stations are air-conditioned and there’s a large network of feeder buses. Trains run every 2 minutes during morning and evening rush hour.
A day pass valid for unlimited rides on the metro and buses costs Dh14, while the Nol Silver stored-value card costs Dh25 (including Dh19 worth of balance) and gives a 10% discount on both metro and bus fares. Both are available at metro stations and major bus stations. The Silver card is useful for public transport users who are planning on taking more than 6 trips on any of the services during their stay. After 6 trips, one starts saving money compared to the Red ticket due to the 10% discount.
Rechargeable Gold Card can be used in Gold Class cabins. Gold Class journeys cost twice as much as regular journey

Monorail
In addition, a 5 km monorail system shuttles passengers across the Palm Jumeirah to the Atlantis hotel, but it’s not yet connected to the metro network and is thus of very limited utility.

Dubai Tram
The Dubai Tram opened on the 12th of November 2014, and links Dubai Marina with the Burj Al Arab and JBR. The tram interchanges with Jumeirah Lakes Towers Station and Dubai Marina Station of the Dubai Metro’s Red Line, and two more metro station are expected to connect with the tram in the future.
Services operate every six minutes from 06:30 to 01:38. On Fridays, the service starts at 09:00. The tram has a fixed fare of AED 5 per ride regardless of the distance travelled. A Nol Card can be used by passengers to check-in and check-out of the tram by scanning the card at the platform screen doors.

Bus
Dubai has an extensive public bus network [62], which is a cheaper means of travelling within the several districts in Dubai. A map of the bus system can be found online [63], as well as detailed route maps and timetables [64]. Public buses are clean and cheap, but unfortunately not very comprehensive and (on some routes) quite infrequent. The bus system is most useful for getting between different areas of central Dubai, or between the various suburbs, rather than general transport. Taxis or a fair amount of walking will also be required if you wish to visit Dubai without a car of your own.
You will require a Nol card or ticket for fare payment. Cards could be purchased from most bus stations, metro stations, and sometimes from the bus driver.
The main bus stations are Gold Souq Market (in Deira) and Al Ghubaiba bus station (in Bur Dubai). The flat fare is 3 AED, but might be higher for hour-long rides to distant suburbs. Clear route maps and time-tables are placed inside a few bus stands. Ramadan timings differ. The front seats are reserved for women.
Probably the single most useful service for the casual tourist is Line 8, which starts at the Gold Souq, takes the tunnel under the Creek to Heritage Village, and then sets off down Jumeirah Rd (just behind the beach) and all its hotels and malls, up to Burj al-Arab and Wild Wadi. Line 8 terminates near the Internet City, while its 8A variant goes down a little further and also serves the Mall of the Emirates.

Abra/ Water taxi
An easier way of crossing the Dubai Creek & dubai Canal is by abra, essentially a small ferry. Abra stations are located along the Creek on both the Bur Dubai and Deira sides, and the system of filling the boats is remarkably efficient. The cross-river trip costs 1 Dirham (AED 1) per passenger, payable to the driver after the boat has left the station, and affords a very picturesque view of the city (not to be missed). Abras set off very regularly, and the service is available round-the-clock.
Abras can also be hired for a private tour (for a price negotiable with the driver but usually very cheap). This is quite a popular activity at sunset on a clear day, particularly if the driver is able to enliven the tour with stories about the structures on either side of the Creek. Just make sure that the purpose of one’s abra hire is made clear at the outset–otherwise you will be in for a very expensive cross-river trip or a crowded private tour.

Taxi
Taxis ply the streets of Dubai and are relatively easy to spot. The easiest place to find them is at the taxi queue at one of the malls or outside a hotel. Waving down a taxi on the road is possible, but can be difficult during rush hours. At peak times (7-9AM & 4-7PM workdays, and Friday evenings) demand far exceeds supply.
Taxis are metered at 1.75 dhs/km, so no haggling is necessary. The rates of all taxi companies — Dubai Transport, National, Cars, Metro, and Arabian — are identical, so just take the first one that comes along. From the airport, there is a standing charge of 25 dhs; all other street pickups attract a standing charge of 12.00 dhs during the day & night, but a minimum fare of 12 dhs applies, and there is a surcharge of 20 dhs for going to Sharjah. Taxis are not exempt from the Salik road toll charges which costs an additional 4 Dh . Beware of unmarked hotel taxis and limousines though: while some of these are metered, they are not tied to the official rates, and can be much more expensive. One way to spot whether a taxi is official or not is to look for a meter: no meter, don’t get in.