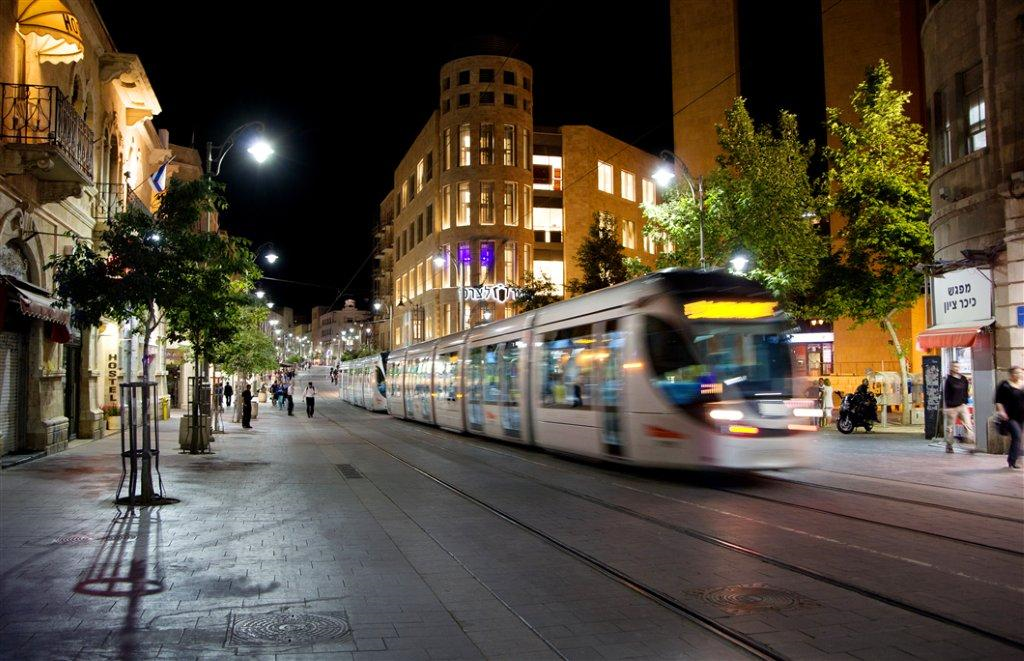 By foot: Much of Jerusalem is walkable and is pleasant to walk. The humidity level of Jerusalem is much lower than most cities in Israel, but you must remember the city is built on mountains- and you might have to climb some steep ascents. Some of the neighborhoods are a bit distant, so make sure to check on Google Maps the distance before you go. The Old City has to be toured by foot, not only because it is more impressive this way, but also because many of the lanes and alleyways are inaccessible to cars.

By taxi: Cabs are plentiful in the city of gold, but be warned as the drivers may try to rip you off by “taking the scenic route” or charging a fixed price instead of on the meter. Insist that the driver turns on the meter (Mo-neh) and you should have no problems.

By bus: The description here refers solely to West Jerusalem (the jewish part). The Arab system of buses is based on two bus stations near Damascus Gate.
The most effective public transportation option is currently in the form of buses. Take into consideration that the intercity bus system is quite confusing, especially for a tourist. Even people living in Jerusalem their whole lives won’t be able to help you, if they aren’t familiar with the bus route you’re interested in using. This is caused by the lack of any official bus route maps, and to the fact that bus routes and numbers tend to change rapidly. Buses are run by “Egged” Company. Most buses are dark green, but you might see the older red and white buses too.
To use the bus, you pay the driver as you board the bus. All bus rides are at a fixed price of NIS 6.90 (March 2014), no matter how many stops you stay on for. You may pay in change or bills. Entrance to the bus is from the front door only, and exit is usually from the back door(s).
Once you pay the driver, a ticket will come out of the gray calculator next to the driver. You must take and keep the ticket, for proof to the conductor, which tends to come and check.
Many bus drivers have a very limited knowledge in English, so try to find someone else to help you when needed.
The Jerusalem City Tour (Bus #99), intended for tourists, does a loop of pretty much the whole city and costs ₪45 adults and ₪36 children for a one-day pass.
Sharm El Sheikh to Jerusalem visit Jerusalem by bus from Sharm el Sheikh, as well as visit Bethlehem and the Dead Sea in one day trip.

By light rail: The Jerusalem Light Rail links the north-eastern neighborhoods to the south-western neighborhoods, runs along the western side of the Old City, and passes through the city center. Additional lines are planned to be constructed later.
The light rail runs past many areas of interest to tourists: Damascus Gate station close to the Old City gate of that name; City Hall station (Saffra square) which is close to the Jaffa Gate of the Old City; King George V station which is close to Ben Yehuda street; the light rail station just outside the Jerusalem Central Bus Station; the Mahane Yehuda station at the main markets which are the largest in Israel, and there are also numerous food stalls offering local cuisine. The tram line runs along Yaffo Street (also referred to as Jaffa Street) which has many interesting cafes and shops in the portion of Yaffo/Jaffa Street that lies between City Hall station and King George V station. At the southern end of the light rail line, at the Mount Herzl station, are Yad Vashem holocaust museum as well as Mount Hertsel national cemetry where famous citizens, prime ministers and Israeli soldiers have been buried.
As of 1 January 2014, the ticket price is ₪6.90 with no transfers alowed unless you have a Rav kav card. (Same price, February 2016)
The light rail service ceases a few hours before Shabbat on Friday afternoon, and starts up a few hours after the end of Shabbat on Saturday night. The regular travel times on other days of the week can be found at the light rail website (citypass.co.il) which can be found at the official website of the Jerusalem Light Rail.
The roads on which the tram line runs are half taken up by the tram lines, so cars must travel in single lanes in the remaining half of the road. This means that travel by car along these roads, shared by the tram, can be quite congested – in particular, Yaffo street (or Jaffa Street), which has parts that are exclusively used by the light railway.
Note that if asking locals where is the nearest station of the Jerusalem Light Rail, some people refer to it as the “train station” or “tram station”.

By bike: Bike rentals are available at the abraham-hostel 67 Hanevi’im street, Davidka square, as well as at Bilu Bikes, 7 Bilu Street for a guided Bike tour Cycling in Jerusalem is probably the best way to see the city, recommended by many past travelers, Lonely Planet and Tripadvisor ; this is a way to see the real Jerusalem. This 3-5 hour tour covers most of Jerusalem’s historical neighborhoods, including many places that most visitors never get to see. The tour includes, The Israeli Parliament, The valley of the Cross, “Rehavia” and “Talbia”, The German Colony, “Mishkanit Shananim”, Jaffa Gate the Russian Compound and “Nachlaot”, to name only a few. The ride goes through side streets, short cuts and allies, known by few other than our expert guides.

Despite the hills around Jerusalem, the ride in the city is not as hard as people tend to think, and the ride can be modified to suite families and inexperienced riders.
The Jerusalem Night ride includes an unforgettable ride through the empty streets of the 3000 year Old City.