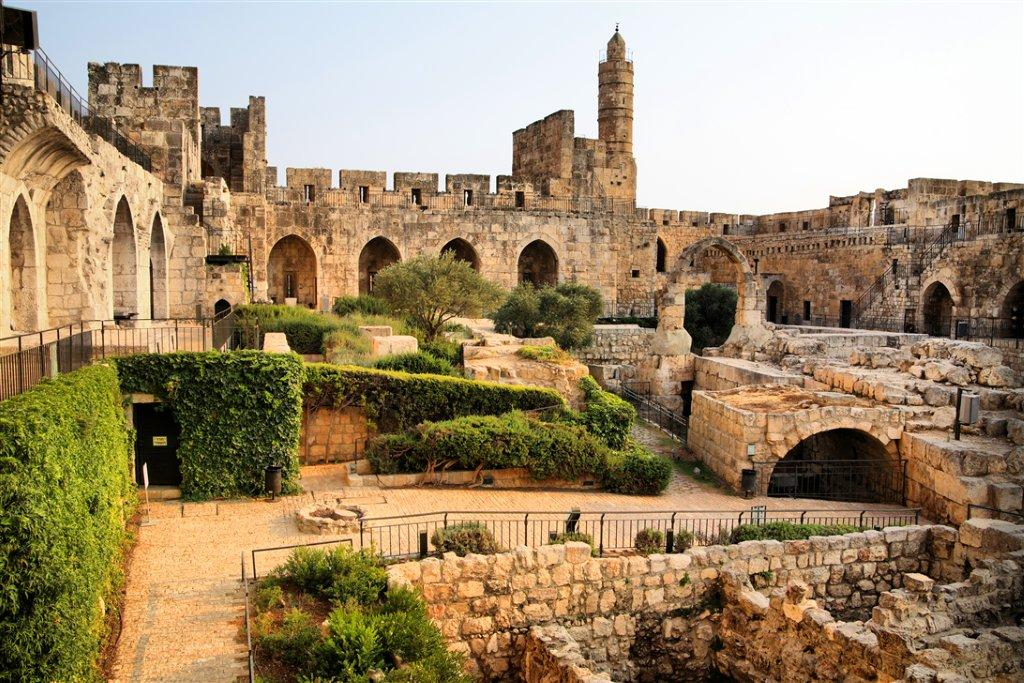 Located in the Judean Mountains between the Mediterranean Sea and the Dead Sea, Jerusalem is considered holy to the three major Abrahamic religions: Judaism, Christianity, and Islam. It is the holiest city in Judaism and the spiritual center of the Jewish people since the 10th century BCE, the third-holiest in Islam and is also home to a number of significant and ancient Christian landmarks. It is also a city with a very violent past, as it was fiercely contested between Christianity and Islam during the brutal Crusade era. While the city has had a large Jewish majority since 1967, a wide range of national, religious, and socioeconomic groups are represented here. The walled area of Jerusalem, which until the late nineteenth century formed the entire city, is now called the Old City and became a UNESCO World Heritage Site in 1982. It consists of four ethnic and religious sections — the Armenian, Christian, Jewish, and Muslim Quarters. Barely one square kilometer, the Old City is home to several of Jerusalem’s most important and contested religious sites including the Western Wall and Temple Mount for Jews, the Dome of the Rock and al-Aqsa Mosque for Muslims, and the Church of the Holy Sepulchre for Christians.

Surrounding the Old City are more modern areas of Jerusalem. The civic and cultural center of modern Israel extends from western Jerusalem toward the country’s other urban areas to the west, while areas populated mostly by Arabs can be found in the northern, eastern and southern districts.

Archaeological findings prove the existence of development within present-day Jerusalem as far back as the 4th millennium BCE, but the earliest written records of the city come in the Execration Texts (c. 19th century BCE) and the Amarna letters (c. 14th century BCE). According to Biblical accounts, the Jebusites, a Canaanite tribe, inhabited the area around the present-day city (under the name Jebus) until the late 11th century BCE. At that point (c. 1000s BCE), the Israelites, led by King David, invaded and conquered the city, expanding it southwards and establishing it as the capital of the United Kingdom of Israel and Judah (the United Monarchy). It was renamed at this time as Yerushalayim (Jerusalem), a name by which it is still referred to today.

King David’s reign over Jerusalem ended around 970 BCE when his son Solomon became the new king. Biblical sources state that within a decade Solomon started to build the first of two Holy Temples within city limits — Solomon’s Temple (or the First Temple), a significant site in Jewish and Christian history as the last known location of the Ark of the Covenant. The period of the First Temple was marked by the division of the United Monarchy at the time of Solomon’s death (c. 930 BCE) when the ten northern tribes, originally part of the Monarchy, split off to form the Kingdom of Israel. Under the leadership of the bloodline of David and Solomon, Jerusalem continued to act as the capital of the southern par of the split, the Kingdom of Judah. Later, with the Assyrian conquest of the Kingdom of Israel in 722 BCE, Jerusalem became the center of a Judah strengthened by the great number of Israeli refugees. In approximately 586 BCE, the Babylonians conquered the Kingdom of Judah including the city of Jerusalem, and the First Temple Period came to an end.

In 538 BCE, after fifty years of Babylonian captivity, the Jews were given permission from Persian King Cyrus the Great to return to Judah so they could rebuild Jerusalem and construct the Second Temple. The construction was completed in the year 516 BCE, seventy years after the destruction of the First Temple. Jerusalem regained its status as capital of Judah and center of Jewish worship for another four centuries, with a considerable portion of that period under Hasmonean rule. By 19 BCE, the Temple Mount was elevated and construction began on an expansion of the Second Temple under Herod the Great, a Jewish client king under Roman rule. In 6 CE, the city, as well as much of the surrounding area, came under direct Roman rule as the Judea Province. Still unchallenged, the Roman rule over Jerusalem and the region came to an end with the first Jewish-Roman war, the Great Jewish Revolt, which resulted in the destruction of the Second Temple in 70 CE. Jerusalem once again served as the national capital for the people of the region during the three-year rebellion known as Bar Kokhba’s revolt. The Romans succeeded in sacking and recapturing the city in 135 CE and as a punitive measure, the Jews were banned from Jerusalem.

In the five centuries following Bar Kokhba’s revolt, the city remained under Roman and Byzantine rule. With the city controlled by Roman Emperor Constantine I during the 4th century, Jerusalem was transformed into a center for Christianity, with the construction of sites such as the Church of the Holy Sepulchre. For most of the time between Constantine’s rule and the arrival of the Muslim forces in 638, Jews were banned from Jerusalem. From that point, the rights of the non-Muslims under Islamic territory were governed by the Pact of Umar, and Christians and Jews living in the city were granted autonomy in exchange for a required poll tax (jizya). When Caliph Umar first came to the city, he requested that Sophronius, the reigning Patriarch of Jerusalem, guide him and his associates to the site of the Jewish Holy Temple. Upon the advice of Caliph Umar’s associate, Ka’ab al-Ahbar (a Jewish convert to Islam), who convinced Caliph Umar that the Foundation Stone on the Temple Mount was the site of the Islamic miracle of the Isra and Miraj, Caliph Umar decided to build the Dome of the Rock and Al-Aqsa Mosque. By the end of the 7th century, a subsequent caliph, Abd al-Malik, had commissioned and completed the construction of the Dome of the Rock over the Foundation Stone. In the four hundred years that followed, Jerusalem’s prominence diminished as Arab powers in the region jockeyed for control.

In 1073, Jerusalem was captured by Seljuk Turks. In response, Jerusalem was re-taken by the First Crusaders in 1099, with many of the city’s then 30,000 Muslim and Jewish inhabitants slaughtered. That would be the first of several conquests to take place over the next five hundred years. In 1187, the city was taken from the Crusaders by Saladin. Between 1228 and 1244, it was given by Saladin’s descendant al-Kamil to the Holy Roman Emperor Frederick II. Jerusalem fell again in 1244 to the Khawarizmi Turks, who were later, in 1260, replaced by the Mamelukes. In 1517, Jerusalem and its environs fell to the Ottoman Turks, who would maintain control of it until the First World War.

In 1917 after the Battle of Jerusalem, the British Army, led by General Edmund Allenby, captured the city. The League of Nations, through its 1922 ratification of the Balfour Declaration, entrusted the United Kingdom to administer the Mandate of Palestine and help establish a Jewish homeland in the region. The period of the Mandate saw the construction of new garden suburbs in the western and northern parts of the city and the establishment of institutions of higher learning such as the Hebrew University, founded in 1925.

As the British Mandate of Palestine was expiring, the 1947 UN Partition Plan (Part III) recommended “the creation of a special international regime in the City of Jerusalem, constituting it as a corpus separatum under the administration of the United Nations.” However, this plan was rejected by the Arabs, and at the end of the 1948 Arab-Israeli War, Jerusalem found itself divided between Israel and Jordan (then known as Transjordan). The ceasefire line established through the 1949 Armistice Agreements between Israel and Jordan cut through the center of the city from 1949 until 1967, during which time western Jerusalem was part of Israel and eastern Jerusalem was controlled by Jordan. In 1949, West Jerusalem became Israel’s capital. After the 1967 war, all of Jerusalem was claimed by Israel as its capital.